I so enjoyed helping out with samples for the Egyptian themed shows recently on Hochanda – and WOW the set looked amazing with so many wonderful creations from the team. I think that we all had a huge amount of fun. It really did look like an archaeological set. 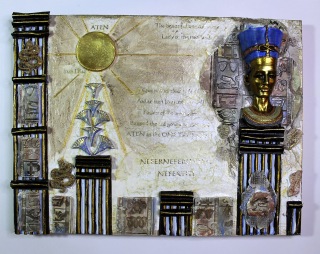 I created this duo of canvases featuring Nefertiti and Tutankhamun to tell a little of their story. Although their likeness was well known to me I really had little idea of their history, so I did a little research. I really enjoyed finding out more about these characters and I had so much fun immersing myself into their mystical world when creating these canvases.

The creative journey:
The canvases were first coated with a layer of Ivory Powertex, and the plaster busts with Bronze Powertex. 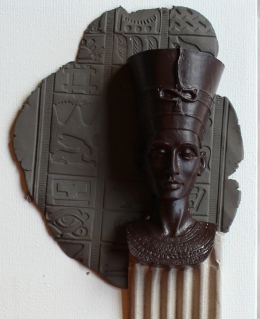 The textured embellishments were made with air dry clay and small clay cutters from my stash. The Hiero Heaven and Scarabella stamps were pressed into the rolled out clay to add texture. Additional texture added to some pieces using a texture mat, and I made the little snakes using a mould (both from my stash). Strips from corrugated card were used to create pillars. I laid out all my elements to get a rough idea of placement and to assess space left for adding text. 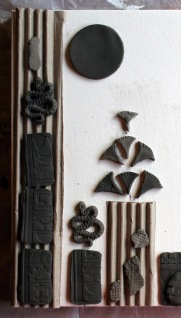 Note: I used an air dry modelling clay that I had in my stash. It is fairly strong when making chunky items but I did find it very brittle when rolled thin. I left it to fully dry overnight and coated it with Ivory Powertex. The Powertex did sink in well (as it remained porous) and considerably strengthened my embellishments. So I was happy to use them on my canvases. However, I would fully recommend using Stone Art Clay if you want hard wearing items, and certainly if you need them to be weather proof (it is designed for this).

Following my bit of historical research I decided on some text to add to my canvases. Nefertiti was the chief wife of the Egyptian Pharaoh Akhenaten who was the father of Tutankhaten (later named Tutankhamun). Originally Akhenaten was named Amenhotep IV but he changed his name when he banned the worship of the old Egyptian gods and instated Aten (Sun Disc – an aspect of the sun god Ra) as the one true god. I therefore depicted the Aten symbol (Sun Disk with rays in gold) on Nefertiti’s canvas.

I used gilding wax around the edges of my canvas and on the Sun Disc (Atan) and gold relief paste to create the Atan rays.

Nefertiti was also known as ‘the beautiful one has come’ (translation of her name) and ‘the lady of the two lands’ – I included this in the gilded text.

Nerfertiti may have ruled for a time as Neferneferuaten, and for a short while alongside Tutankhaten (later named Tutankhamun) but there is some debate on this. She disappeared not long after her husband’s death and it is unsure where her body lays. Although interestingly there is some evidence that she may be in a secret chamber behind the tomb of Tutankhamun. Still a mystery.

Tutankhamun became king when only a boy (‘boy king Tut’) and as mentioned above he was originally named Tutankhaten (‘the living image of Aten’). After the death of his father there was an uprising and the old gods were eventually reinstated. He reinstated Amun-Ra (fusion of the gods Amun ‘the hidden/invisible one’ and Ra the ‘sun god’) and changed his name to Tutankhamun (‘the living image of Amun’). There is a lot of debate around the identity of his mother but it is fairly certain that she would have been a close relation to Akhenaten (sister or cousin, maybe even Nefertiti?).

I hope that I am not boring everyone with history but I found it all fascinating (but also very confusing with all the name changes and the various gods worshipped at the time). 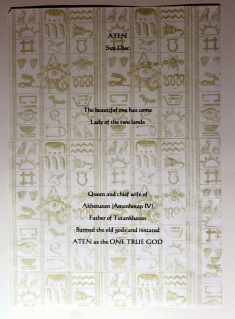 The sentiments were printed on a laser printer (copy paper) and foiled with gold sublimation foil using my laminator. I stamped over the background using Memories Ink and the Hiero Heaven stamp. I then scrunched up the paper and further aged with distress inks.

The background textured paper and sentiments were glued to the canvas using Easy Coat. 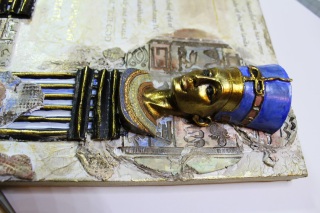 The card pillars were coated (back and front) with Black Powertex. Bister was used to add depth to my textured embellishments. I also mixed various Powercolor pigments into Ivory Powertex and rubbed over the top of the embellishments to give the effect of faded chalk paints. 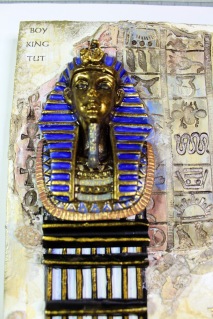 A little Ultramarine Powercolor was mixed with Ivory Powertex and painted into the crevices of the pillars. Gold Colortricx pigment mixed with Easy Varnish was dry brushed onto the surface ridges.

The busts were also coloured with gold varnish, applied fairly liberally for an opulent effect. Where I wanted areas of strong colour (blue, red, green) I applied a base of Ivory Powertex first and then painted over with coloured varnish. Black Powertex was painted into the eye area.

Essentially a mixed media artist I discovered the Powertex range of products about seven years ago and I haven't looked back since. The versatility of the range and the fact that all ages and abilities can create their own unique piece of art are just some of the reasons that in March 2014 we became the distributors of the products in the UK. We are now enjoying travelling around the country introducing everyone to this amazing range of products and taking on a network of tutors who will have the products available and run workshops in their local area. Watch out for us in a town near you! Have you got what it takes to run your own art and craft business? We have opportunities as tutors and stockists of Powertex products and running workshops around the country. View all posts by traceypowertex

We would love to hear from you! Cancel reply

This site uses Akismet to reduce spam. Learn how your comment data is processed.